The all-new Kia Sorento is revealed for the first time today. Powerful, progressive and versatile, the fourth generation of Kia’s flagship SUV is designed and engineered to take on everything life throws at it.

“The Sorento’s evolution over the last 18 years echoes that of the Kia brand as a whole. While the car was initially launched in 2002 as a utilitarian all-terrain vehicle, the 4th Gen Sorento has been transformed into something altogether more desirable.” said Emilio Herrera, Chief Operating Officer for Kia Europe 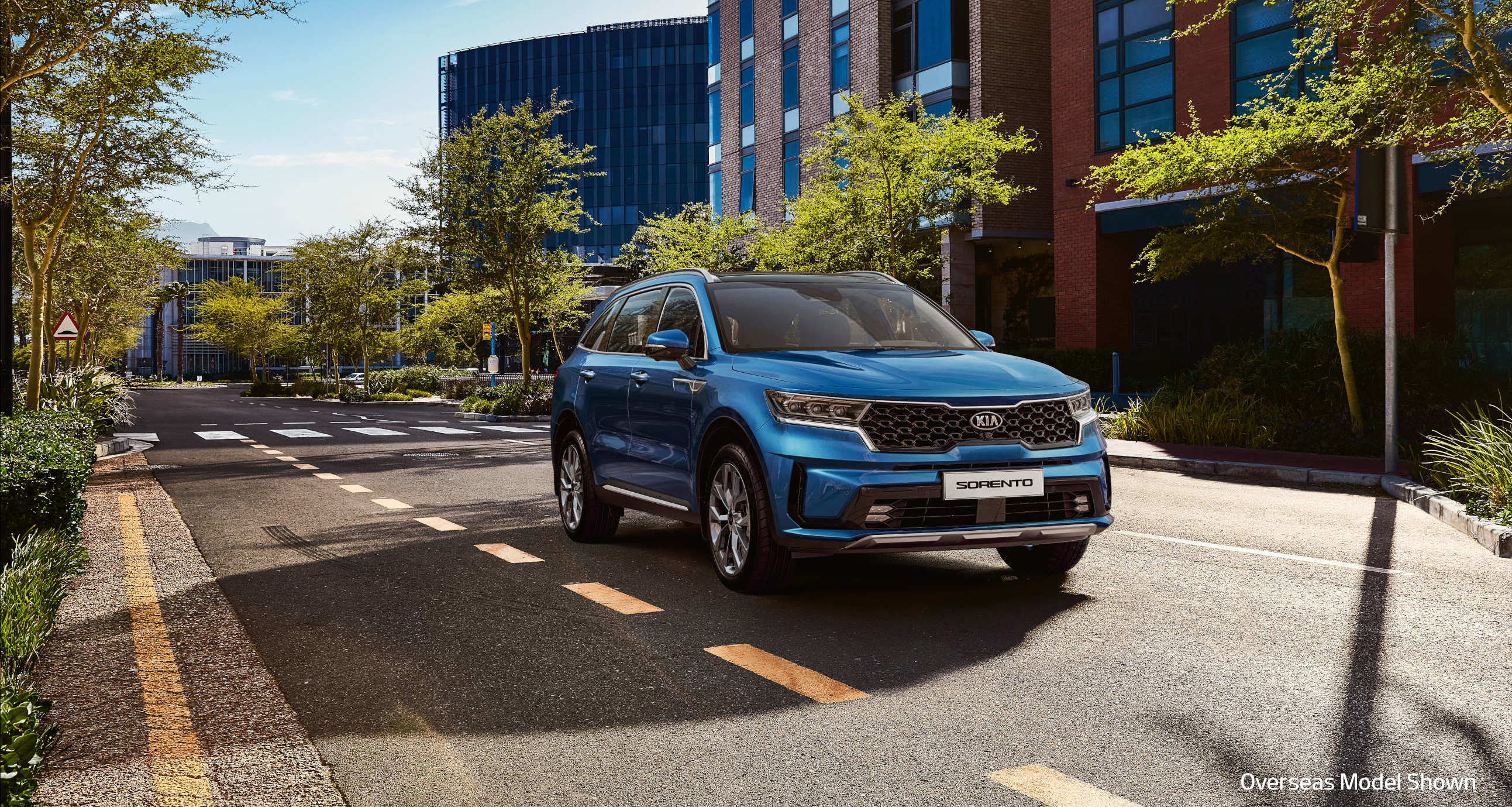 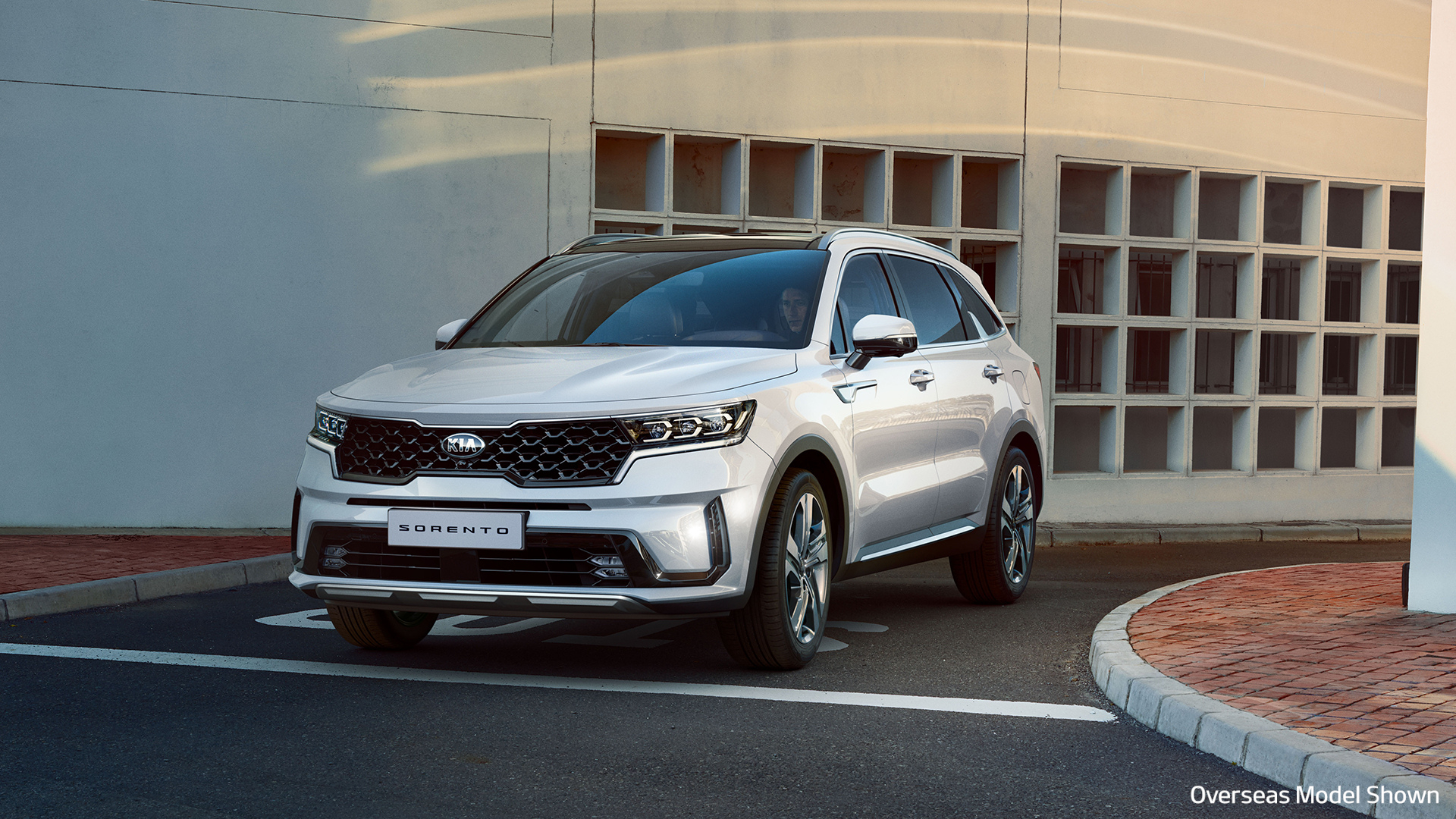 The concept of ‘refined boldness’ inspired Kia’s designers, who sought to maintain the robust, tough-looking aesthetic of earlier generations of Sorento, while applying a greater degree of refinement and elegance, and even a sense of sportiness. Its bodywork incorporates sharp lines and creases – noticeably more sculpted than its more round-edged predecessor. With more contemporary geometric details and more swept-back, elongated proportions, the result is a more confident, more mature and more desirable design than ever. 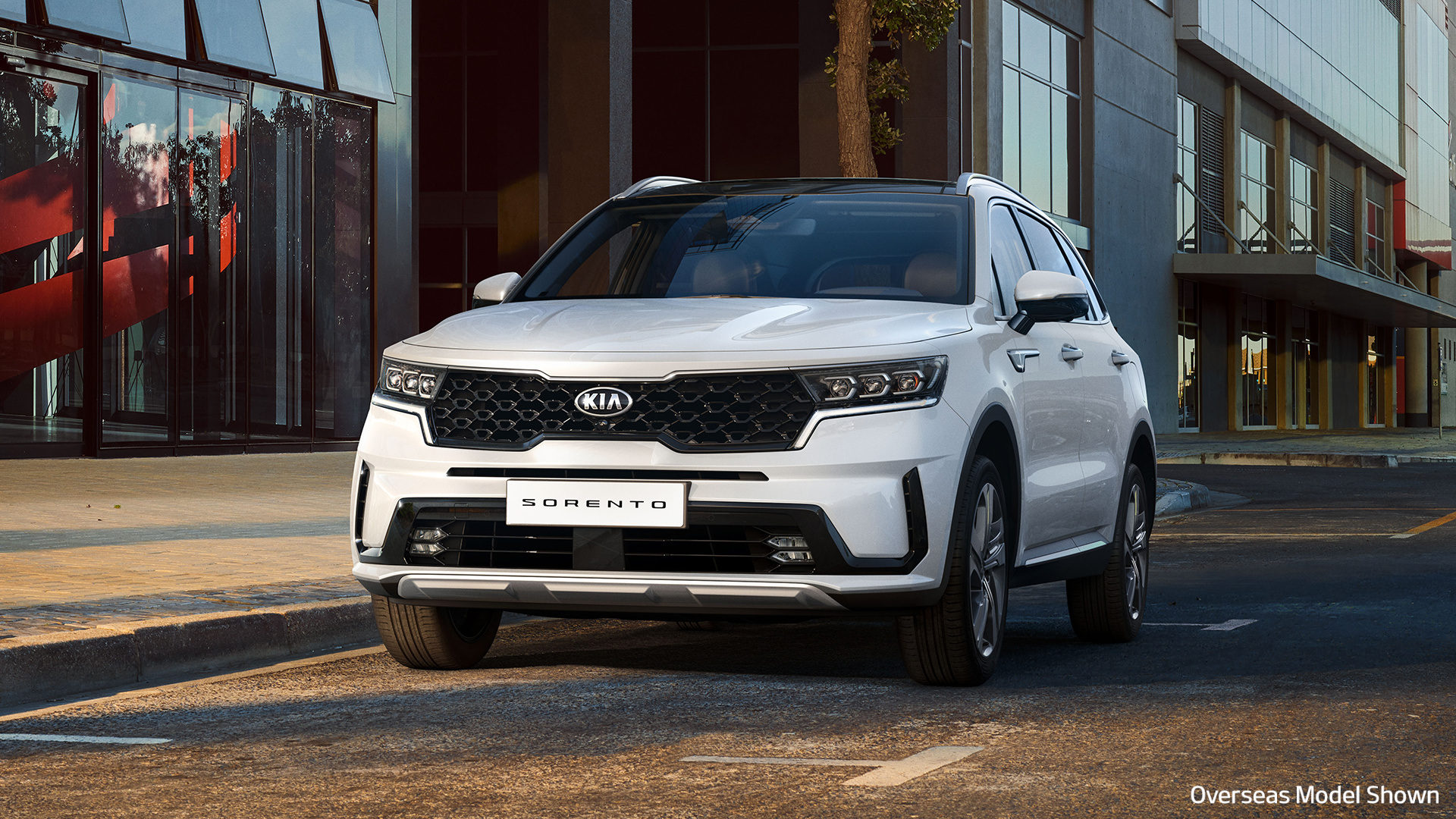 The front of the Sorento evolves with a new interpretation of Kia’s hallmark ‘tiger nose’ grille, displaying a wider shape which organically wraps around the integrated headlamps on each side. The headlamps themselves feature a new ‘tiger eyeline’ LED daytime running light, adding extra focus to the design by depicting the intense impression of the lines around a tiger’s eyes. This sharper, more assertive appearance is complemented by a wide, rectangular lower air intake, bookended by wing-shaped air curtains to channel air around the car. A sharp bumper lip is also capped with a skid plate, enhancing its robust appearance. The new model is 1,900 mm wide, 10 mm wider than the third-generation Sorento. 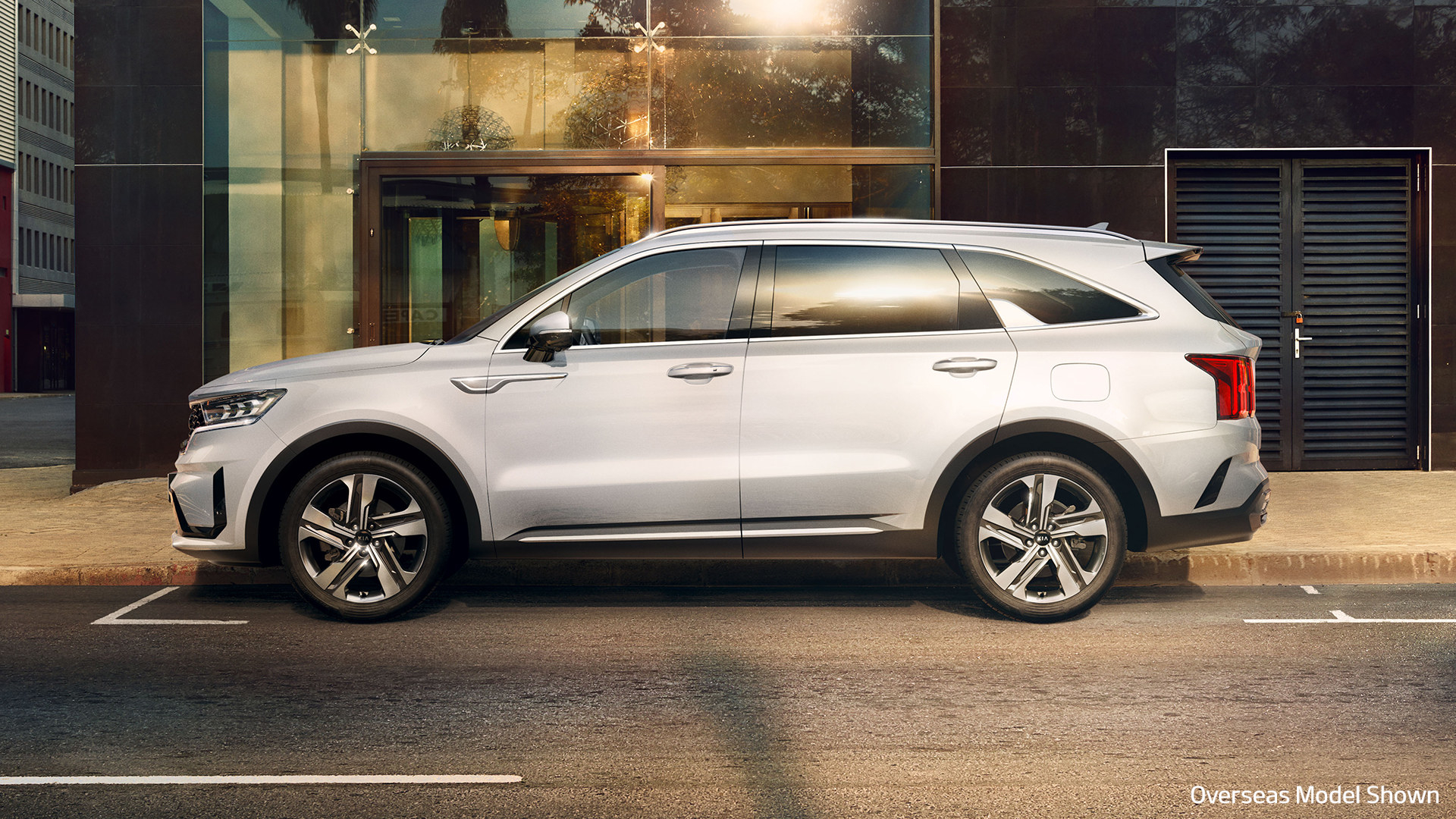 In profile, the proportions of the Sorento are subtly adapted to make it appear longer. The new model is 10 mm longer than its predecessor (now 4,810 mm), yet it features shorter front and rear overhangs. The additional length is found in the wheelbase (a result of the Sorento’s new platform), which has grown by 35 mm to 2,815 mm. This subtly adapts the visual character of the Sorento, making it look longer and ‘faster’, despite being 10 mm taller. It also extends the length of the bonnet, drawing the A-pillar 30 mm further back from the front axle. The trailing edge of the hood wraps around the front wings and turns into a single, strong character line which extends along the side of the Sorento and into the rear lamps.

Ever recognisable as a Sorento, it retains the characteristic wide D-pillar, substantial bodywork and clad wheel arches that have defined all three generations to-date. It also adopts certain other design features from more recent Kia models, however, including a new dynamic shape on its C-pillar and sculpted body surfaces with sharp creases. 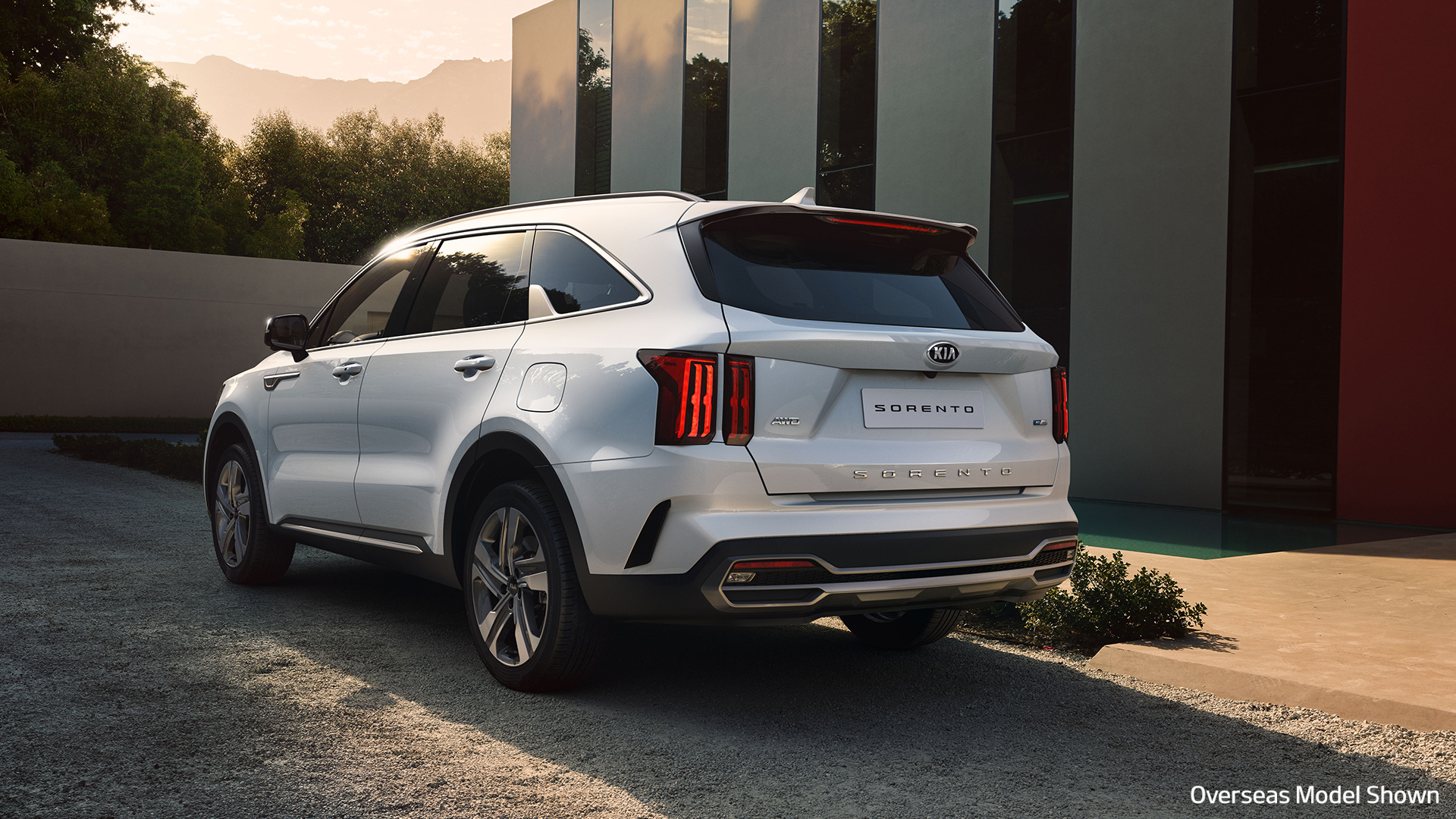 Attractive, upscale cabin with premium material quality and progressive tech. The interior of the fourth-generation Sorento represents a step-change in quality and design for Kia cabins. From the first-generation 2002 Kia Sorento, which provided occupants with a practical, robust and utilitarian space, the Sorento today provides owners with something altogether more striking, desirable and comfortable.

The attractive, upscale cabin introduces a sophisticated next-generation design, based around twin digital displays in the dashboard. The 12.3-inch digital driver instrument cluster is twinned with a 10.25-inch touchscreen infotainment and nav system at the centre of the dashboard. These display information clearly within the driver’s line of sight, and create an innovative wide-screen user experience. The car’s many functions can also be controlled with new haptic buttons on either side of the screen, which also feature further down the dashboard for the climate control system. The focal point of the dashboard is the eye-catching vertical ventilation stack, with a chrome-effect surround that extends onto the centre console below.

The cabin of the all-new Sorento subtly integrates a range of other technologies, including an available Mood Lighting system. This emits soft ambient downlighting from beneath the dashboard and door trim, creating a lounge-like feeling and greater sense of space. A wireless smartphone charger also sits at the base of the centre console, while a powerful 12-speaker BOSE® surround-sound audio system is also available, delivering a more immersive sound to all three rows.

A new ‘Sound of Nature’ ambient sound function for certain markets enables occupants to select from a range of relaxing natural soundscapes. The cabin’s Mood Lighting system lets users tailor the cabin even further, with the interior illuminated in one of seven pre-set ‘core’ colours selected specifically by Kia interior designs, or from a full gamut of 64 colours.

Material quality is enhanced, with a cabin that blends metallic trim, leather upholstery, and embossed satin-effect surfaces. Applied throughout the interior and across the dashboard, the cabin boasts a more sophisticated appearance and ambience as a result. In Europe, the Sorento is offered to buyers with a choice of black cloth, leather (grey or black single-tone, or black-and-grey two-tone), or black quilted Nappa leather.

The all-new 7-seat Sorento is based on Kia’s new third-generation ‘N3’ platform, providing superior space for people and cargo through more intelligent packaging. The result is one of the most versatile and spacious cars in its class. 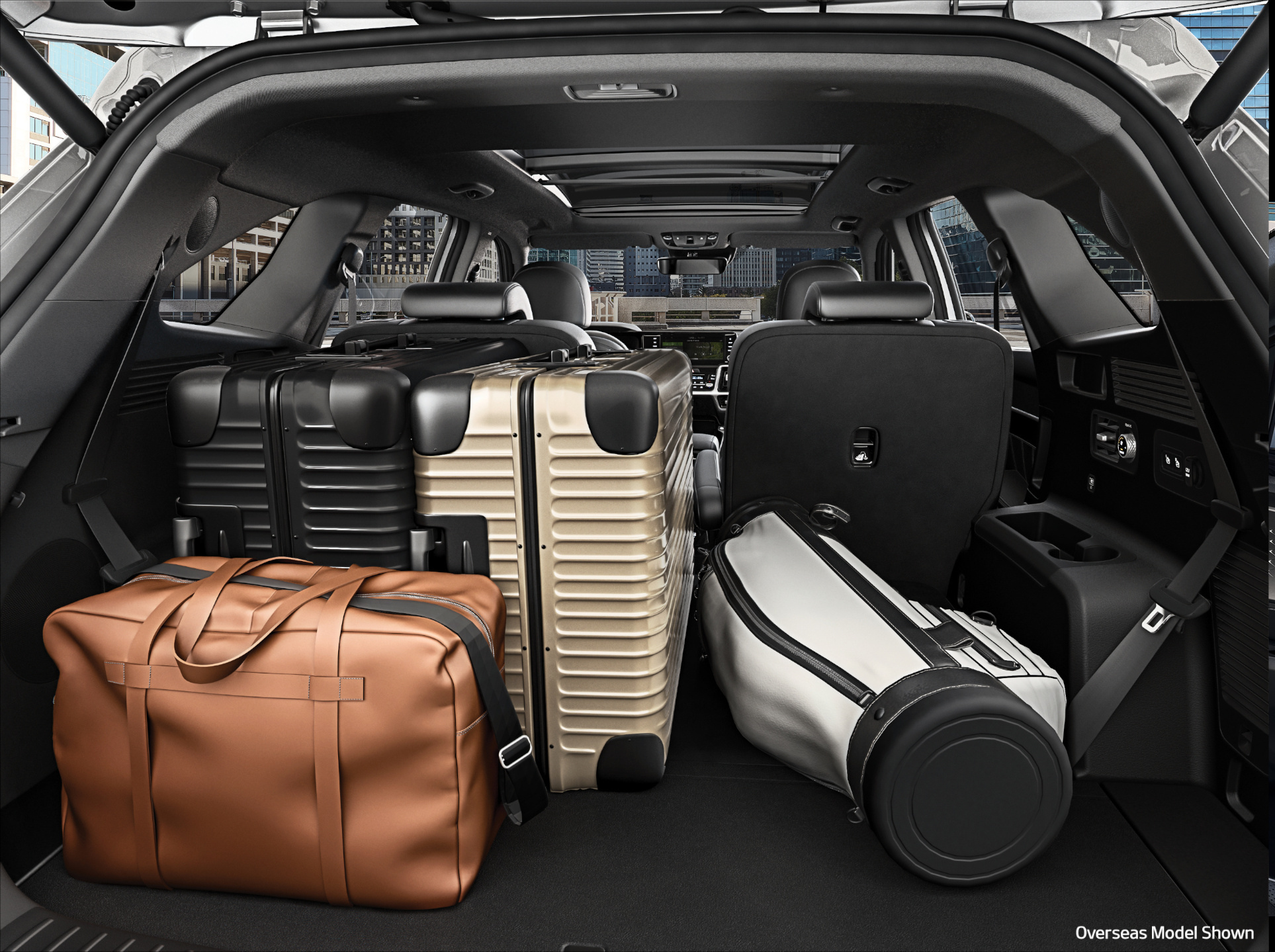 The new platform is based around a compact engine bay structure and shorter front and rear overhangs, with a 35 mm longer wheelbase creating greater cabin space between the axles. Not only does this enable the new model’s stylish, more swept-back design; the structure and layout of the new platform means the Sorento is able to accommodate electrified powertrains for the first time.

For passengers, the new platform maximises space in all three rows, offering more head-, leg- and shoulder-room than many rivals. In particular, the new platform has created a significant amount of extra legroom for first- and second-row occupants, as well as more headroom for third-row passengers.

The Sorento has always been popular with customers looking for practical third-row seating, and the new model makes life even easier for rear passengers. Aided by the platform’s longer wheelbase, the second-row seats now slide up to 45 mm further, creating a wider point of entry to the third row with more space for feet and legs. There is also a new grab handle built into the interior trim inside the C-pillar, giving third-row passengers something to hold on to as they climb aboard. Once seated, the third-row armrest has also been extended by 100 mm for greater elbow support, while incorporating a cupholder and smartphone tray.

The first-generation Sorento (2002-2009) was based on a ladder-frame chassis, with the second-generation model (2009-2015) – the first monocoque-based Sorento – marking a step change in the car’s on-road behaviour. Now, the new ‘N3’ platform represents a similar leap forward, engineered to maximise driving stability in all environments. 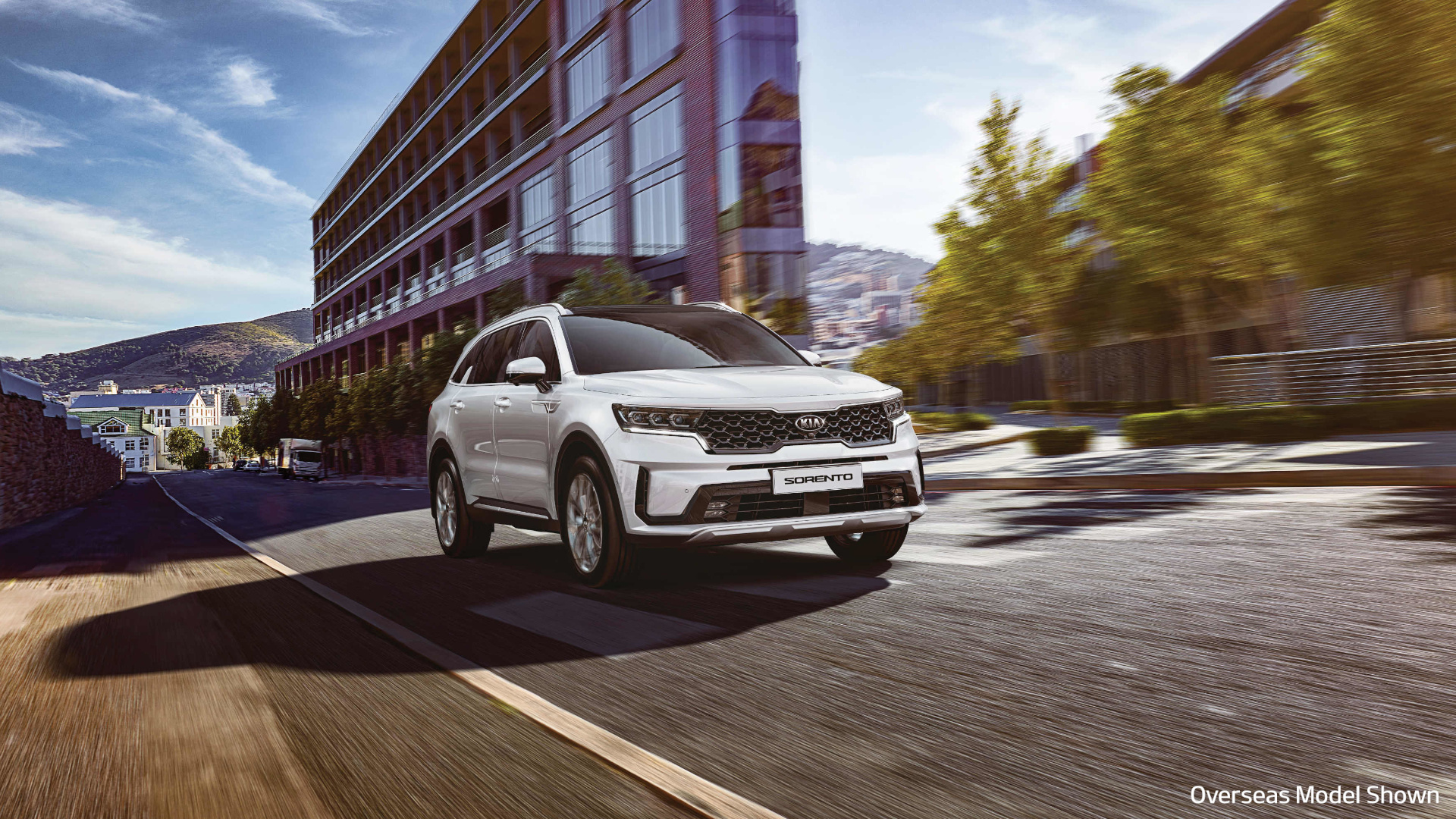 The car now delivers an even more assured, comfortable ride and more satisfying, enjoyable driving character than its predecessor, aided by heavily revised fully-independent suspension. Engineers have sought to reduce the effect that road surface imperfections have on the body, and to reduce noise and vibrations through the suspension, while also improving body control and steering responses under cornering. This has been achieved with a series of geometry changes and new components, as well as improvements to the structure of the suspension system. The 35 mm longer wheelbase also contributes to an overall improvement in cruising comfort, while the new bodyshell – with a 4% average increase to tensile strength throughout its structure – also results in lower body vibrations. 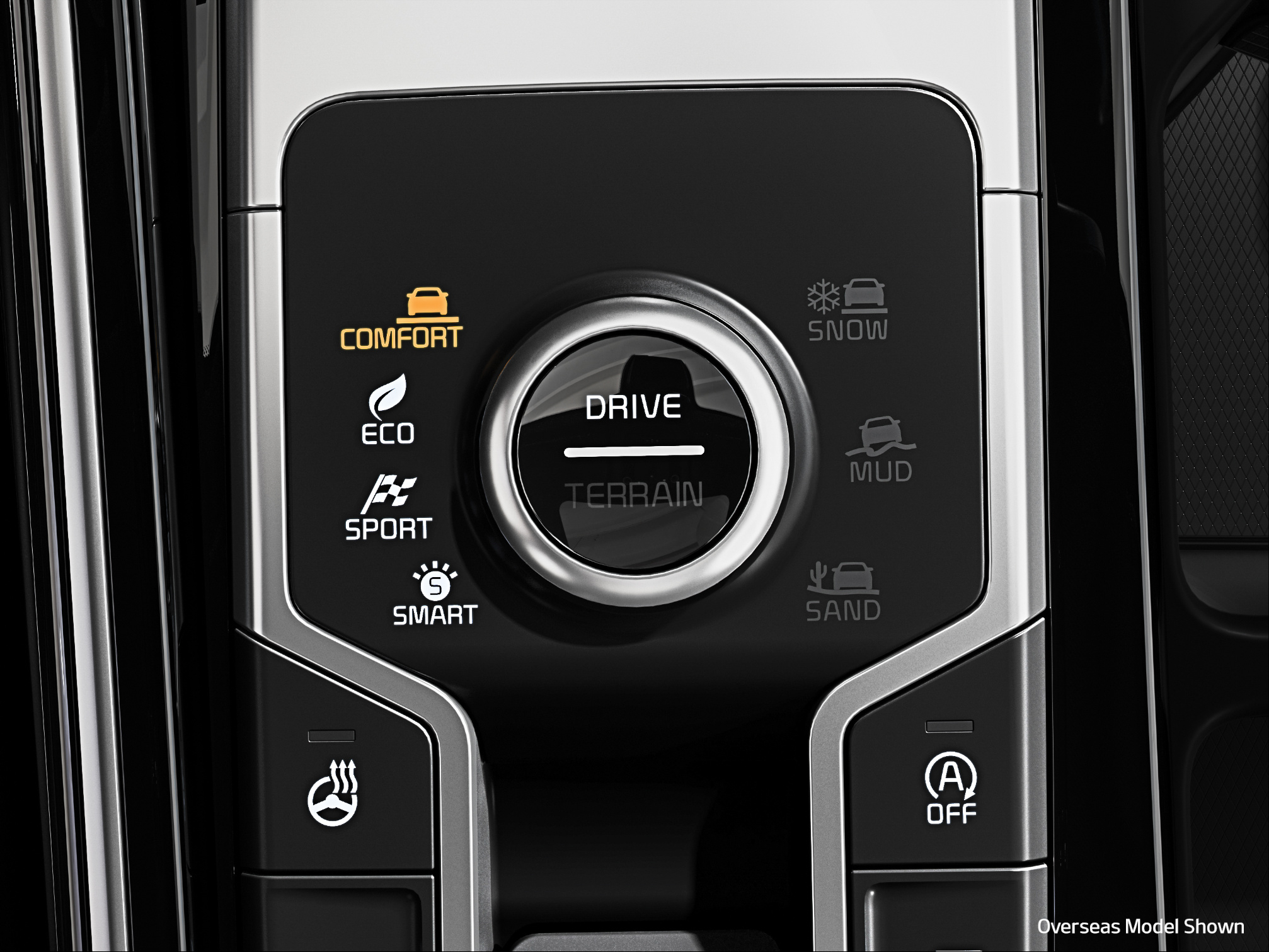 New for the fourth generation, the latest Sorento model offers enhanced all-terrain capability over its forebears thanks to a new Terrain Mode. Paired with the optional all-wheel drive system, Terrain Mode makes the Sorento more capable in mud, snow and sand. With each mode selectable from a dial on the centre console, Terrain Mode carefully controls the car’s standard electronic stability control (ESC), as well as the distribution of torque to all four wheels. It also adapts transmission shift times to help the car find and maintain traction in a range of driving environments.

The Sorento offers higher levels of active and passive safety than many of its rivals thanks to an enhanced range of driver assistance systems. Kia’s Advanced Driver Assistance Systems (ADAS) help to reduce many of the inherent hazards and stresses of driving, protecting occupants and other road users on every journey.

Kia’s ‘level two’ autonomous driving technology, Lane Following Assist (LFA), controls acceleration, braking and steering depending on the vehicles in front. LFA operates between speeds of 0 and 180 kph, using camera and radar sensors to maintain a safe distance from the car in front, while monitoring road markings to keep the Sorento in the centre of its lane.

The new Sorento also features a Rear View Monitor (RVM) with Reverse Parking Collision-Avoidance Assist (PCA) and Rear Cross-traffic Collision-avoidance Assist (RCCA). In addition, it is also the first Kia available in Europe with the company’s new Remote Smart Parking Assist (RSPA), which enables drivers to move their car autonomously out of a front-and-back parking space remotely with their key fob. This is designed to make it easier for passengers to get in and out of the car in tight parking spaces, or if another driver parks too close to access any of the doors. RSPA brakes the Sorento automatically if it detects another car, cyclist or pedestrian behind the vehicle or crossing behind it. The Sorento’s Safe Exit Assist feature also prevents rear doors from opening if the vehicle detects a hazard approaching from behind, such as a cyclist or another vehicle. 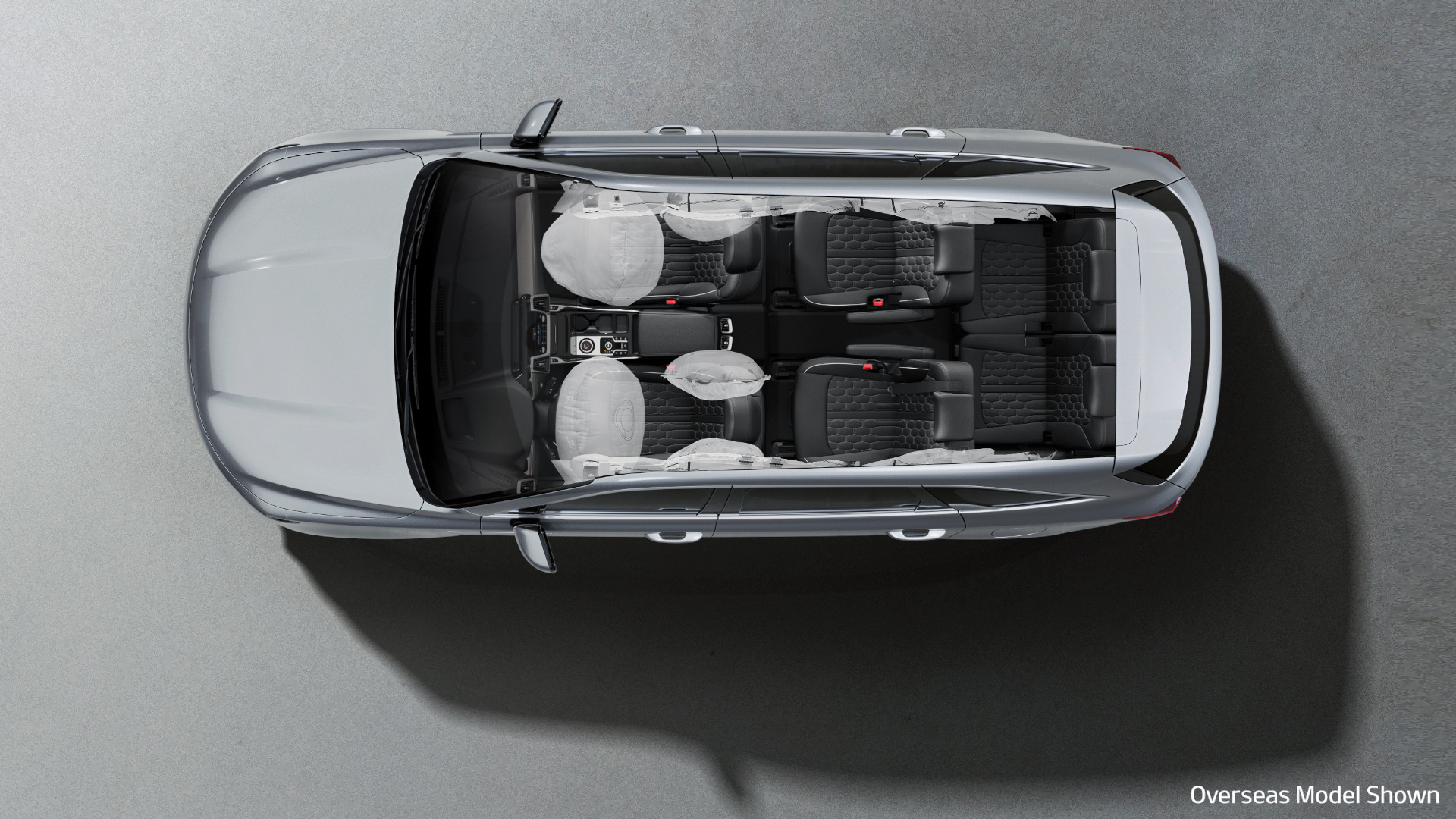 The Sorento is fitted with up to seven airbags (dual front airbags, dual front seat-mounted side airbags, side curtain airbags with rollover sensor, and front centre airbag). The front centre airbag, a new innovation, provides additional head protection for front-seat occupants and is designed to prevent their heads coming into contact during a collision. All Sorento models are equipped as standard with Kia’s Vehicle Stability Management (VSM) and Electronic Stability Control systems to help drivers maintain control under braking and cornering.

The new Sorento also implements Kia’s first Multi-collision Brake system, which enables the Sorento to mitigate the severity of secondary collisions. It automatically applies vehicle brakes when the airbags have been deployed after an initial collision, further protecting occupants from secondary frontal or side impacts. 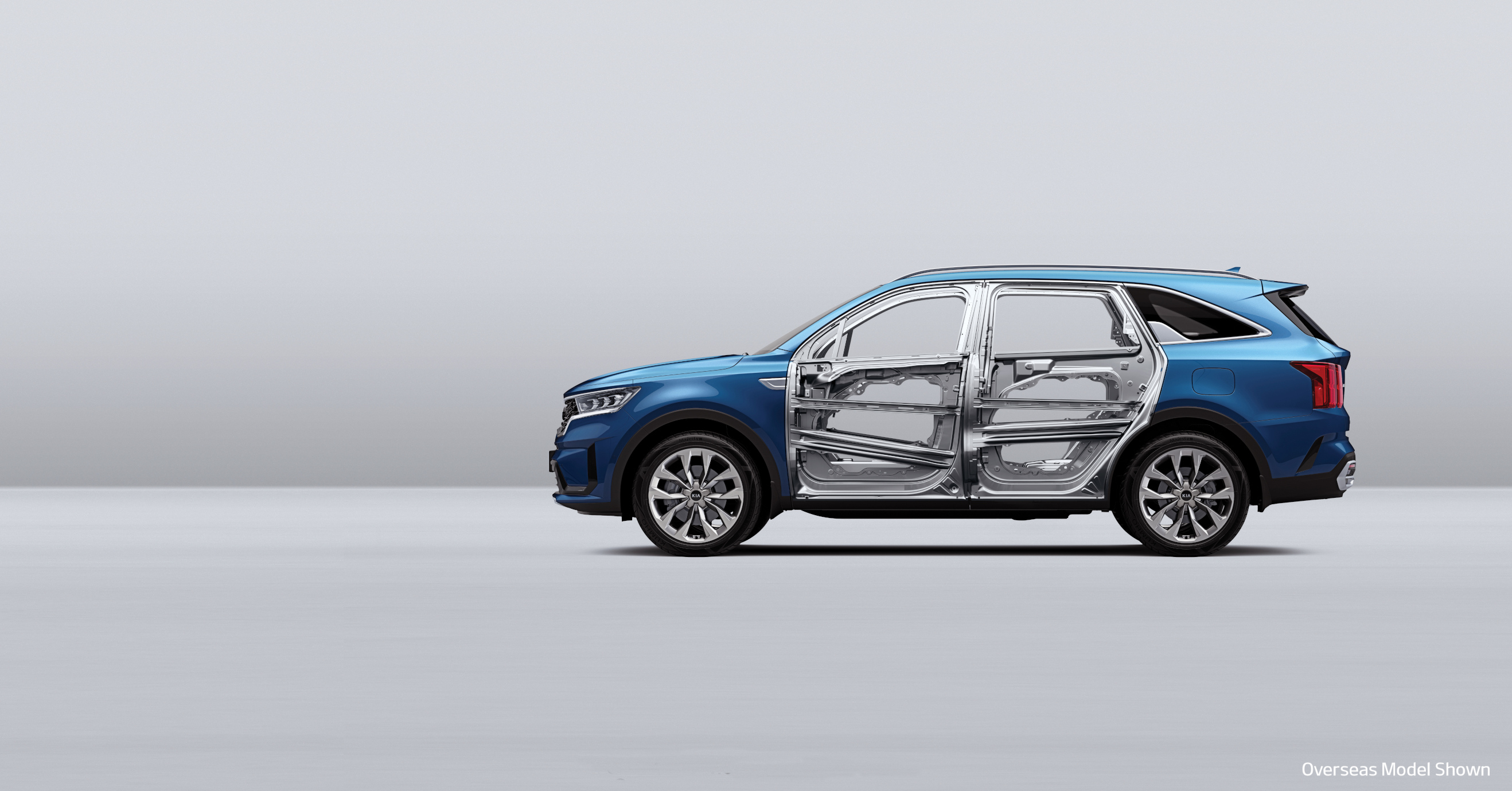 The Sorento’s body is made up of a blend of steel and aluminium, maximising torsional rigidity while keeping weight low. The bodyshell construction features a higher proportion of Advanced High-Strength Steel and hot-stamped steel components than its predecessor. The blend of high-strength steel enhances occupant safety, giving it torsional rigidity 12.5% higher than the perceived ‘safety leader’ in the Sorento’s segment – yet the strengthening to the bodyshell construction renders it 5.6% (21.3 kg) lighter than that of its predecessor. Furthermore, the more rigid bodyshell reduces road vibrations in everyday use.