The All-New Ceed redefines expectations for the competitive C-segment, and its focus on comfort, equipment, style and low running costs give it fantastic potential as a company car.

If you’re a company car driver, statistics show that you’ll likely cover more than double the annual mileage of the average motorist – that’s an awful lot of time spent behind the wheel. So for business users, it’s particularly important that your car offers a comfortable environment with everything you need to make your life easier.

That’s one of the first things you notice when you get behind the wheel of the All-New Ceed – the cabin is a truly pleasant place to be. Run your hands over the dash, the steering wheel – or any other surface for that matter – and you’ll be struck by the high-quality, soft-touch materials used throughout.

It’s not just the opulence of the materials that make the All-New Ceed’s interior special, it’s the overall design and layout, too. It’s clear the designers have thought about the driver here – for example, the centre console is angled towards the driver to make it easier to operate on the go. This driver-centric layout makes it that bit easier to set your air conditioning or adjust your radio when you’re out and about allowing you to keep your attention on the road – that’s vital considering how many miles business users cover, and a welcome bonus for safety-conscious fleet managers.

The dashboard is split into an upper area – including the sleek ‘floating’ touchscreen – and a lower level that hosts the audio, heating and ventilation controls. This clever layout allows more space in the passenger footwell, and also gives a sculptural, slim-line appearance. 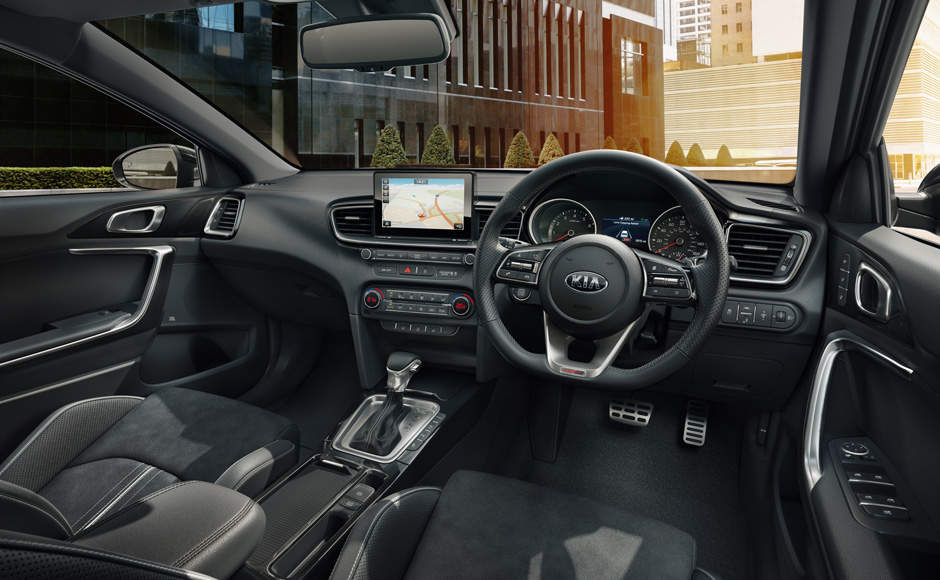 That luxurious interior would be wasted were the All-New Ceed not relaxing to drive. Thankfully, it’s packed with advanced tech that makes driving a breeze.

Driving through the hustle and bustle of rush hour, it quickly becomes clear how this tech can take the stress away from everyday driving – no one wants to arrive at work or a client meeting feeling agitated after an unnecessarily difficult journey. For example, the All-New Ceed can come equipped with Forward Collision-Avoidance Assist – City (FCA), a clever system that can spot potential accidents before they happen and even keeps an eye out for pedestrians. Should it sense a potential collision, it uses haptic feedback to give you warning, and can even apply the brakes to help avoid or reduce the damage from a collision – keeping you out of harm’s way, and your car out of the garage.

Then there’s Lane Following Assist (LFA). This detects road markings and gently steers the car to keep the Ceed in the centre of its lane on the motorway – it’s a subtle aid that makes your journey that bit more relaxing. Better still, it works with the Smart Cruise Control to control acceleration and braking depending on the convoy of vehicles in front. The system uses external sensors to maintain a safe distance from the vehicle in front, operating between 0 and 81mph. You could be cruising at 70mph, slow to a stop in traffic, then get back up to 70 without even touching a pedal. Motorway miles have never been so relaxing – in a rush-hour jam, it’s a real luxury. There’s even a warning when someone is in your blind spot, thanks to Blind Spot Collision Warning (BCW).

Kia believes the All-New Ceed is the most high-tech car in its class. And when you look at the safety kit on offer, it’s hard to argue otherwise. Delve into the car’s infotainment systems and it gets even better.

A ‘floating’ 8” touchscreen satellite navigation system with Kia Connected Services featuring TomTom® Live comes as standard on every Kia Ceed except the entry-level ‘2’ grade, which still comes with a 7” touchscreen audio system. You could also opt for the ‘2 Nav’ model if you want to add sat nav to the entry-level car. Full Bluetooth® smartphone integration, Android Auto® and Apple CarPlay® also come as standard – making it incredibly easy to safely stay in contact when on the road, so you never miss a call. It also gives you access to your favourite apps and music, and even use your own preferred navigation software.

All DCT models have Kia’s latest Drive Mode Select system which lets you switch the All-New Ceed’s dynamic characteristics to suit your mood.

Put it in ‘Normal’ and the steering is relaxed and the engine prioritises efficiency. Change to ‘Sport’, and you’ll notice the throttle becomes more responsive, enabling faster acceleration. The steering weights up and is more receptive to subtle inputs to give a sportier feel.

Speaking of sporty, the All-New Ceed comes with a 1.4-litre T-GDi engine that produces 138bhp – that’s more than the previous 1.6-litre GDi despite its lower displacement. This is thanks to the turbocharger that provides a wider torque band, making it more responsive in a wider range of driving conditions, while also reducing emissions. Floor the accelerator, and the All-New Ceed surges effortlessly forward with a refined, throaty growl. An updated version of the popular 1.0- litre T-GDi engine is available, too, producing 118bhp, and returning an impressive 50.4mpg on the WLTP combined cycle – plus, its low CO2 emissions mean BIK starts at 28%.

For those in search of a diesel, there’s the 1.6-litre CRDi engine. It meets the latest Euro-6d- Temp emissions standard, and uses Selective Catalytic Reduction (SCR) active emissions control technology to regulate emissions. The engine produces 114bhp and 280Nm of torque when paired with a manual gearbox, or 300Nm of torque when fitted with Dual-Clutch Transmission (DCT).

The diesel Ceed achieves a notable 58.9mpg on the WLTP combined cycle, while BIK starts from just 27% – usefully low for a diesel in this class – and certainly an attractive option when taking running costs into account.

Every engine is paired with a six-speed manual transmission, while the 1.4-litre T-GDi and 1.6- litre CRDi engines are also available with Kia’s smooth-shifting seven-speed Dual-Clutch Transmission (DCT).

CONFIDENT AND IN CONTROL

All-New Ceed has been tested extensively on European – including UK – roads to make sure that it has the handling to match its potent engines. Turn into a corner and the front end reacts instantly. Push on, and the Ceed remains steady with confidence-inspiring grip levels.

Yet, take a cruise on the motorway, and it’s incredibly relaxed and refined. This is thanks to the All-New Ceed’s fully independent suspension system, which really does grace the car with a new level of agility, while also filtering out the bumps and inconsistencies, particularly on UK roads.

As a package, the All-New Ceed is mighty impressive. It redefines the expectations of this sector with its ample tech, advanced powertrains and luxurious cabin. Whether you’re a company car driver or fleet manager, you’ll be hard pushed to find a box that it doesn’t tick – style, comfort, safety, tech and running costs have all been carefully considered. The result? An incredibly attractive fleet proposition that appeals both emotionally and practically, and of course, comes with our industry-leading seven-year, 100,000-mile warranty for extra peace of mind.